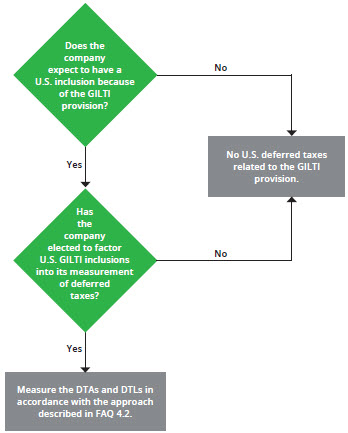 During year 2, the entity determines that the valuation allowance is no longer needed and releases it through continuing operations by debiting the valuation allowance and crediting tax benefit (i.e., continuing operations) in the amount of $35. The Act is enacted in year 3, and the entity remeasures its DTA related to the AFS security by using the new lower corporate tax rate of 21 percent to credit the DTA and debit tax expense (i.e., continuing operations) in the amount of $14 ($100 unrealized loss on the AFS security multiplied by the difference in tax rates of 14 percent (35 percent minus 21 percent)).
The entity adopts ASU 2018-02 as of January 1 of year 4. The amount remaining in AOCI related to the AFS security as of the date of enactment is $0. This is because when the tax effects of the changes in value of the AFS security occurred, the entity had a full valuation allowance recorded. Accordingly, no amount is reclassified from AOCI to retained earnings under ASU 2018-02. The entries for years 2, 3, and 4 are as follows:

Valuation Allowance Recorded After Tax Effects
Assume the same facts as in the previous example, except that the valuation allowance is not recorded until the beginning of year 2 and is not released before enactment.
In year 1, the entity records the $35 DTA and corresponding tax benefit in OCI related to the $100 unrealized loss on the AFS security. The entries for year 1 are as follows: