Internal Control Considerations Related to Adoption of the New Revenue Recognition Standard (May 9, 2017) 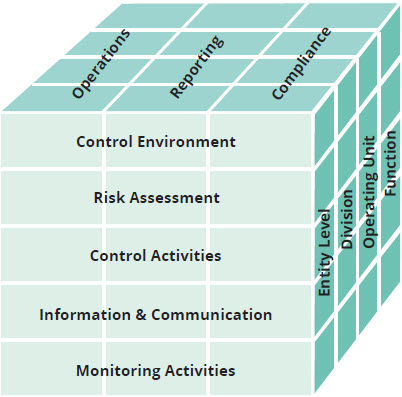 In assessing the design of effective internal control with respect to the new revenue standard, a company may consider its objectives in terms of internal and external reporting, and on the basis of those objectives, take into account the five components of internal control and the 17 principles within the components. The chart below summarizes the 17 principles and provides examples of their application in a company’s implementation and adoption of the new standard.
1
FASB Accounting Standards Update No. 2014-09, Revenue From Contracts With Customers, as amended.
2
Based on data from Audit Analytics for fiscal years ending 2010 through 2017 as reported in auditor ICFR attestation reports.
3
Speech by Mr. Bricker at the March 21, 2017, Annual Life Sciences Accounting & Reporting Congress. Also, a keynote address by Mr. Bricker at the December 5, 2016, AICPA Conference on Current SEC and PCAOB Developments.
4
SEC Staff Accounting Bulletin 74, codified as SAB Topic 11.M, “Disclosure of the Impact That Recently Issued Accounting Standards Will Have on the Financial Statements of the Registrant When Adopted in a Future Period.” See Deloitte’s September 22, 2016, Financial Reporting Alert and Deloitte’s A Roadmap to Applying the New Revenue Recognition Standard for further discussion and related examples of SAB 74 disclosures.
5
See the appendix in Deloitte’s September 22, 2016, Financial Reporting Alert and Deloitte’s A Roadmap for Applying the New Revenue Recognition Standard for a discussion and examples of SAB 74 disclosures.
6
Speech by Mr. Bricker at the March 21, 2017, Annual Life Sciences Accounting & Reporting Congress.
7
Sarbanes-Oxley Act of 2002.
8
SEC Final Rule No. 33-8238, Management’s Report on Internal Control Over Financial Reporting and Certification of Disclosure in Exchange Act Periodic Reports, states that management “must evaluate, with the participation of the issuer’s principal executive and principal financial officers, or persons performing similar functions, any change in the issuer’s internal control over financial reporting, that occurred during each of the issuer’s fiscal quarters, or fiscal year in the case of a foreign private issuer, that has materially affected, or is reasonably likely to materially affect, the issuer’s internal control over financial reporting.”
9
426 U.S. 438 (1976). See also Basic Inc. v. Levinson, 485 U.S. 224 (1988).
10
SEC Regulation S-K, Item 601(b)(31), “Exhibits.”
11
One or more controls may address one or more risks. The number of controls a company may have will vary depending on how the controls are designed to address the company’s risks.
12
Adapted from the 2013 COSO Framework.
Heads Up is prepared by members of Deloitte's National Office as developments warrant. This publication contains general information only and Deloitte is not, by means of this publication, rendering accounting, business, financial, investment, legal, tax, or other professional advice or services. This publication is not a substitute for such professional advice or services, nor should it be used as a basis for any decision or action that may affect your business. Before making any decision or taking any action that may affect your business, you should consult a qualified professional advisor. Deloitte shall not be responsible for any loss sustained by any person who relies on this publication.
The services described herein are illustrative in nature and are intended to demonstrate our experience and capabilities in these areas; however, due to independence restrictions that may apply to audit clients (including affiliates) of Deloitte & Touche LLP, we may be unable to provide certain services based on individual facts and circumstances.
As used in this document, “Deloitte” means Deloitte & Touche LLP, a subsidiary of Deloitte LLP. Please see www.deloitte.com/us/about for a detailed description of the legal structure of Deloitte LLP and its subsidiaries. Copyright © 2021 Deloitte Development LLC. All rights reserved.