by Jen DeSanctis and Andy Winters, Deloitte & Touche LLP
On October 31, 2018, the FASB issued ASU 2018-17,1 which amends two aspects of the related-party guidance in ASC 810.2 The ASU (1) adds an elective private-company scope exception to the variable interest entity (VIE) guidance for entities under common control and (2) removes a sentence in ASC 810-10-55-37D regarding the evaluation of fees paid to decision makers to conform with the amendments in ASU 2016-173 (issued in October 2016).
ASU 2018-17 does not incorporate the changes to the related-party guidance in the VIE primary-beneficiary assessment that were exposed for public comment in the FASB’s June 22, 2017, proposed ASU,4 including amendments to the guidance in ASC 810-10-25-44 (frequently referred to as the “related-party tiebreaker test”). On the basis of feedback received through the comment letter process, the Board decided not to include these changes in the final ASU and added to its research agenda an item to evaluate potential amendments to the relatedparty guidance in the VIE primary-beneficiary assessment.
The determination of whether a legal entity should be consolidated by a reporting entity begins with an evaluation of whether the legal entity is subject to a general exception to the consolidation requirements in ASC 810-10. If a legal entity is not subject to a general exception, the evaluation should focus on whether the legal entity is subject to an exception to the VIE model.5 In March 2014, the FASB issued ASU 2014-07,6 which provided a privatecompany scope exception to the VIE guidance for certain entities that are under common control and have leasing arrangements that meet certain conditions.
If no general scope exception or VIE scope exception is available, when the reporting entity has a variable interest in a legal entity, it is required to determine whether the legal entity is a VIE. If the legal entity is a VIE, the reporting entity should evaluate whether it is the primary beneficiary of the VIE. Under ASC 810, the primary beneficiary of a VIE is defined as the entity that has both (1) the “power to direct the activities of a VIE that most significantly impact the VIE’s economic performance” (the “power criterion”) and (2) the “obligation to absorb losses of the VIE . . . or the right to receive benefits from the VIE that could potentially be significant to the VIE” (the “economics criterion”). ASU 2015-027 (issued in February 2015) and ASU 2016-17 amended the economics criterion to require a reporting entity that is a single decision maker to consider, when assessing the effects of related-party relationships, interests held by its related parties (including de facto agents) only if the reporting entity has a direct interest in the related parties.8 Under ASC 810, as amended by those two ASUs, interests held through related parties under common control are considered (1) in their entirety as direct interests held by the decision maker in the evaluation of whether the decision maker’s fee arrangement is a variable interest and (2) proportionately as an indirect interest held by the decision maker in the primary-beneficiary analysis.
ASU 2018-17 broadens the existing accounting alternative available to private companies by allowing all legal entities under common control to elect not to apply the VIE guidance as long as the reporting entity, the common-control parent, and the legal entity being evaluated for consolidation are not public business entities (PBEs) and meet the criteria in ASC 810-10-15-17AD (added by the ASU). ASC 810-10-15-17AD states, in part:
A legal entity need not be evaluated by a private company (reporting entity) under the guidance in the Variable Interest Entities Subsections if all of the following criteria are met:
ASC 810-10-15-17AE (added by the ASU) provides guidance on applying criterion (a) above, which requires a determination that the reporting entity and the legal entity are under common control. Specifically, ASC 810-10-15-17AE provides that solely for the purpose of applying criterion (a), a private-company reporting entity should consider only the voting interest model when making this determination. That is, a private-company reporting entity is not required to consider the VIE guidance when determining whether criterion (a) is met.
The example below illustrates the applicability of ASC 810-10-15-17AD.
Example 1
Parent has a 100 percent direct voting interest in Entity A (the reporting entity) and a 70 percent direct voting interest in Entity B. Entity A has a 30 percent direct voting interest in B and a 60 percent direct voting interest in C. Third-Party Investor has a 40 percent direct voting interest in C.
The respective voting interests of Parent, A, and Third-Party Investor are summarized in the diagram below. 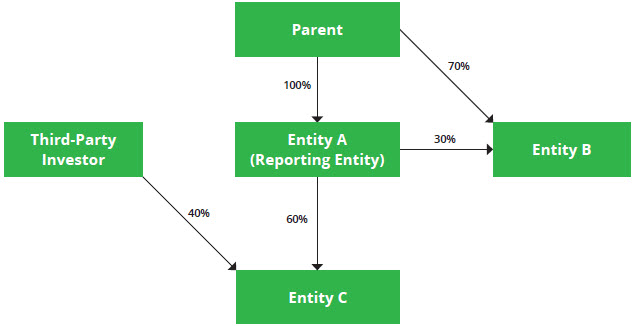 ASU 2018-17 supersedes the existing accounting alternative under ASC 810 that originated from ASU 2014-07 since the FASB believes that the new guidance on common-control relationships for private companies would encompass existing leasing arrangements that qualified for the previous scope exception. Like the accounting alternative under current guidance, the private-company scope exception provided by ASU 2018-17 would be considered an accounting policy that, if elected, should be applied consistently to all legal entities that qualify for it.
As a result of meeting the criteria in ASC 810-10-15-17AD for applying the new scope exception, specifically criterion (d), private-company reporting entities that apply the scope exception and therefore do not consolidate under the VIE model would also not consolidate under the voting interest entity model since those entities would not have qualified for the scope exception if they had a controlling financial interest under the voting interest entity model. Consequently, private-company reporting entities that apply the scope exception will be required to provide enhanced disclosures similar to those required of entities that apply the VIE guidance. See the appendix for a list of the disclosure requirements.
ASC 810 currently requires indirect interests held by related parties under common control to be considered in their entirety11 in the evaluation of whether a decision maker’s fee arrangement is a variable interest under ASC 810-10-55-37(c). ASU 2016-17 amended ASC 810-10-25-42 to require consideration of these indirect interests on a proportionate basis in the primary-beneficiary analysis but did not align current guidance with the considerations related to the variable interest analysis. Accordingly, ASU 2018-17 now aligns the guidance by removing a sentence in ASC 810-10-55-37D12 to conform the guidance in that paragraph with the amendments in ASU 2016-17.
Connecting the Dots
Under current guidance, there is asymmetry in the manner in which a decision maker’s indirect interests held through a related party under common control are evaluated regarding (1) the identification of a variable interest and (2) the determination of a VIE’s primary beneficiary in the assessment of related-party relationships. Under ASU 2018-17, however, the evaluation of indirect interests would be aligned in both of these analyses. Therefore, it is less likely that a decision maker applying ASU 2018-17 would be required to apply the VIE model because fewer fee arrangements would qualify as variable interests.
For example, as the diagram below depicts, a fund’s single decision maker could have only a 5 percent interest in a related party under common control that holds a 20 percent interest in a fund. Under ASC 810 as amended by ASU 2015-02 and ASU 2016-17, the single decision maker would have a variable interest in accordance with ASC 810-10-55-37(c) and ASC 810-10-55-37D because the 20 percent interest held by the entity under common control would be treated as the decision maker’s interest in its entirety. When performing the primary-beneficiary analysis, the decision maker would treat only 1 percent of the interest as its own in determining whether it has satisfied the economics criterion. Accordingly, the decision maker’s fee arrangement would satisfy the power criterion, but the fee arrangement itself would not satisfy the economics criterion. 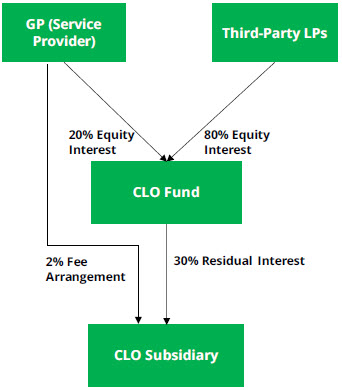