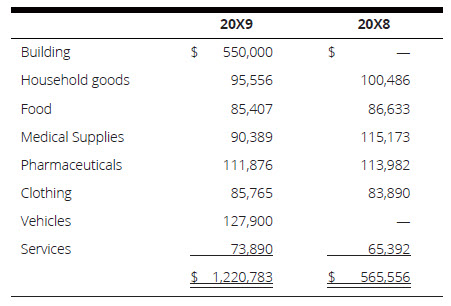 NFP K recognized contributed nonfinancial assets within revenue, including a contributed building, vehicles, household goods, food, medical supplies, pharmaceuticals, clothing, and services. Unless otherwise noted, contributed nonfinancial assets did not have donor-imposed restrictions.
It is NFP K’s policy to sell all contributed vehicles immediately upon receipt at auction or for salvage unless the vehicle is restricted for use in a specific program by the donor. No vehicles received during the period were restricted for use. All vehicles were sold and valued according to the actual cash proceeds on their disposition.
The contributed building will be used for general and administrative activities. In valuing the contributed building, which is located in Metropolitan Area B, NFP K estimated the fair value on the basis of recent comparable sales prices in Metropolitan Area B’s real estate market.
Contributed food was utilized in the following programs: natural disaster services, domestic community development, and services to community shelters. Contributed household goods were used in domestic community development and services to community shelters. Contributed clothing was used in specific community shelters. Contributed medical supplies were utilized in natural disaster services. In valuing household goods, food, clothing, and medical supplies, NFP K estimated the fair value on the basis of estimates of wholesale values that would be received for selling similar products in the United States.
Contributed pharmaceuticals were restricted by donors to use outside the United States and were utilized in international health services and natural disaster services. In valuing contributed pharmaceuticals otherwise legally permissible for sale in the United States, NFP K used the Federal Upper Limit based on the weighted average of the most recently reported monthly Average Manufacturer Prices (AMP) that approximate wholesale prices in the United States (that is, the principal market). In valuing pharmaceuticals not legally permissible for sale in the United States (and primarily consumed in developing markets), NFP K used third-party sources representing wholesale exit prices in the developing markets in which the products are approved for sale (that is, the principal markets).
Contributed services recognized comprise professional services from attorneys advising NFP K on various administrative legal matters. Contributed services are valued and are reported at the estimated fair value in the financial statements based on current rates for similar legal services.
55-70W The following table illustrates the disclosures in paragraph 958-605-55-70V for each category of contributed nonfinancial asset. It includes both amounts and narrative disclosure. For illustrative purposes, only one year is presented.
Contributed Nonfinancial Assets
Connecting the Dots
As discussed in ASC 958-605-55-70U, NFPs may use either a table or narrative format (or a combination of both) to disclose the required information.
ASU 2020-07 is effective for all NFPs for fiscal years beginning after June 15, 2021, and interim periods within fiscal years beginning after June 15, 2022. Early adoption is permitted.
The ASU must be applied retrospectively, and NFPs must provide the transition disclosures required by ASC 250-10-50-1 in the period of adoption. Such disclosures include:
Connecting the Dots
Although the ASU is effective for all NFPs for fiscal years beginning after June 15, 2021, it must be applied retrospectively. NFPs should therefore ensure that they are prepared to provide the required disclosures for fiscal years beginning after June 15, 2020 (if they present comparative financial statements).
1
FASB Accounting Standards Update (ASU) No. 2020-07, Presentation and Disclosures by Not-for-Profit Entities for Contributed Nonfinancial Assets.
2
For titles of FASB Accounting Standards Codification (ASC) references, see Deloitte’s “Titles of Topics and Subtopics in the FASB Accounting Standards Codification.”
Heads Up is prepared by members of Deloitte's National Office as developments warrant. This publication contains general information only and Deloitte is not, by means of this publication, rendering accounting, business, financial, investment, legal, tax, or other professional advice or services. This publication is not a substitute for such professional advice or services, nor should it be used as a basis for any decision or action that may affect your business. Before making any decision or taking any action that may affect your business, you should consult a qualified professional advisor. Deloitte shall not be responsible for any loss sustained by any person who relies on this publication.
The services described herein are illustrative in nature and are intended to demonstrate our experience and capabilities in these areas; however, due to independence restrictions that may apply to audit clients (including affiliates) of Deloitte & Touche LLP, we may be unable to provide certain services based on individual facts and circumstances.
Deloitte refers to one or more of Deloitte Touche Tohmatsu Limited, a UK private company limited by guarantee (“DTTL”), its network of member firms, and their related entities. DTTL and each of its member firms are legally separate and independent entities. DTTL (also referred to as “Deloitte Global”) does not provide services to clients. In the United States, Deloitte refers to one or more of the US member firms of DTTL, their related entities that operate using the “Deloitte” name in the United States and their respective affiliates. Certain services may not be available to attest clients under the rules and regulations of public accounting. Please see www.deloitte.com/us/about to learn more about our global network of member firms. Copyright © 2022 Deloitte Development LLC. All rights reserved.