by Aaron Michael Shaw and Bernie De Jager, Deloitte & Touche LLP
ASC 7181 requires the use of a fair-value-based measurement method for share-based payment arrangements. In the absence of an observable market price, an entity will generally use a valuation technique such as the Black-Scholes-Merton model to estimate the fair-value-based measure. While ASC 718 does not require the use of a particular model, it does require, at a minimum, that the selected valuation model incorporate certain inputs. One input that may be subject to significant management judgment is the fair value of the underlying shares as of the grant date.
For tax purposes, entities will often hire a specialist to perform independent valuations to assist in determining the value of the underlying shares. (Such valuations are often referred to as “Section 409A valuations” since they are subject to the requirements of that Internal Revenue Code section.) Early-stage companies often obtain the independent valuations only once per year. However, as illustrated in Figure 1, the dates of the valuations do not always coincide with the grant date for a share-based payment award. As a result, management will need to assess the current fair value of the underlying shares as of the grant date.
Figure 1 — Valuation Dates of Independent Evaluations 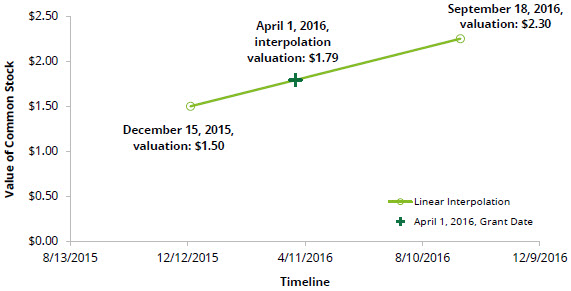 Assume the same facts as Example 1 above; however, X’s operating results were higher than originally forecasted in the December 15, 2015, valuation model. Specifically, X performed above expectations during the interim period July 1, 2016, through September 18, 2016. Its performance was primarily driven by higher than expected customer acquisitions and improved pricing. Before July 1, 2016, management evaluated the qualitative and quantitative factors discussed above and did not identify any significant events that occurred before July 1, 2016, that would have caused a material change in fair value of the common stock. Management therefore concluded that the common stock valuation was flat over this period.
We believe that in the absence of an orderly transaction or of the data necessary for the application of the income and market approaches, it is acceptable for management to perform a “hockey stick” interpolation between the December 15, 2015, and September 18, 2016, valuation to determine the fair value of the common stock as of April 1, 2016. This is because management has evidence that the increase in the fair value of the common stock was primarily attributable to better-than-expected growth from July 1, 2016, through September 18, 2016. Figure 3 below illustrates X’s interpolation.
Figure 3 — Hockey Stick Interpolation 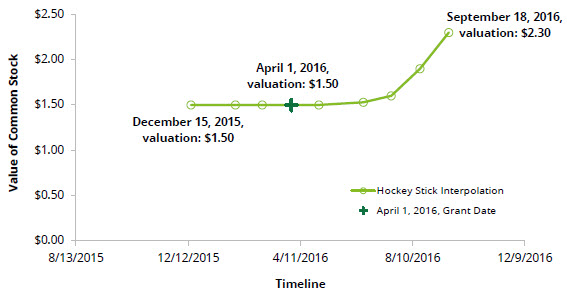