Download the PDF version
Since the May 2014 release of the FASB’s and IASB’s new revenue standard (issued as ASU 2014-091 by the FASB and IFRS 152 by the IASB), the boards have been working to identify issues related to the standard’s implementation. The boards’ joint revenue transition resource group (TRG), which was formed to provide feedback on the standard’s implementation, has held six meetings thus far. These meetings have resulted in a one-year deferral of the standard’s effective date3 and certain other proposed clarifications to the new guidance.
The standard replaces almost all current revenue guidance (including industry-specific guidance), greatly enhances the related disclosure requirements, and requires entities to use significant judgment (e.g., in determining variable consideration in a contract with a customer or whether collectibility from a customer is probable). Therefore, entities will need to establish appropriate processes, systems, and internal controls to account for contracts with their customers under the new standard. These activities are expected to require significant time and effort.
While the deferral gives entities more time to implement the new standard, for many entities — particularly public entities that will adopt the standard on a full retrospective basis — the first annual period to which they will need to apply the standard is fiscal years beginning on or after January 1, 2016.
The following are some key takeaways related to implementing the new revenue standard:
This Heads Up discusses certain considerations related to implementing the new revenue standard and includes data from an informal Deloitte-sponsored survey.
The new revenue standard gives entities the option of using either a full retrospective transition method or a modified retrospective transition method and allows entities to apply certain optional practical expedients at their discretion. As a result, entities will need to review contracts that commenced several years before the new standard’s effective date. In addition, entities will most likely be required to perform dual tracking of revenue balances during the retrospective period given the potential difficulty of retroactively recalculating revenue balances when the new revenue standard becomes effective.
Over the past few months, Deloitte has sponsored various seminars on the new revenue standard and obtained feedback from participants through questionnaires.4 Figure 1 shows survey respondents’ “thoughts” regarding the transition method they may adopt:
Figure 1 — Which Method Will You Use to Adopt the New Revenue Standard?

Only 14 percent of respondents indicated an affirmative decision on a method of adoption, with 10 percent noting they would adopt the new revenue standard on a full retrospective basis. Overwhelmingly, respondents had not reached a definitive conclusion regarding selection of a transition method. Of the 86 percent that had not affirmatively responded on which method they would use for adoption, 49 percent indicated a “preliminary leaning” to one of the new revenue standard’s transition methods.
In deciding which transition method to use, companies should confer with key stakeholders and gain an understanding of the methods used by peer companies. The greater the differences expected between a company’s legacy revenue accounting and accounting for revenue under the new standard, the more the company may want to consider using the full retrospective transition method. Under this method, the company would reflect revenue consistently for all years presented in its financial statements rather than for only the latest year presented, as is permitted under the modified transition method.
In addition, entities are permitted to early adopt the new revenue standard. (However, under U.S. GAAP, early adoption is limited to the effective date before the standard’s deferral.) As shown in Figure 2, nearly 60 percent of respondents to Deloitte’s survey do not plan to early adopt the new standard.
Figure 2 — Will You Early Adopt the New Revenue Standard? 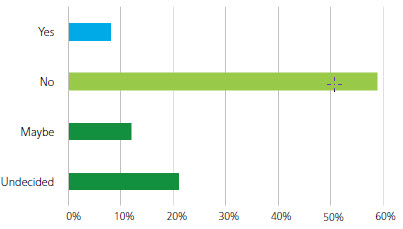 Management will need to exercise significant judgment in applying certain aspects of the new revenue standard’s requirements, including those related to the identification of performance obligations and allocation of revenue to each performance obligation. Accordingly, to comply with the new revenue standard’s new accounting and disclosure requirements, entities will have to (1) document new or different judgments and (2) gather and track information that they may not have previously monitored. The systems and processes associated with such information may need to be modified to support the capture of additional data elements that may not currently be supported by legacy systems. Further, to ensure the effectiveness of internal controls over financial reporting, management will want to assess whether it should revise existing or implement additional controls. In assessing the effect of applying the new revenue standard on systems, processes, and internal controls, entities may need to consider questions such as the following:
Despite the potential for significant changes to systems, processes, and internal controls, many respondents to Deloitte’s survey indicated the following about their current state of readiness to implement the new revenue standard:
Figure 3 — Have You Started to Implement the New Standard?

Figure 4 — Have You Established a Budget for Implementation? 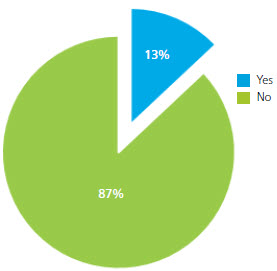 Figure 5 — Do You Expect the New Standard to Have a Material Impact? 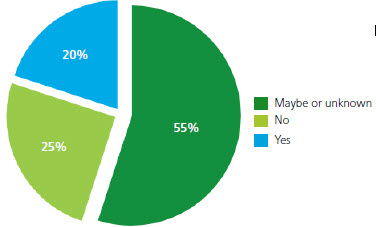 Only 25 percent of respondents believed that the new revenue standard would not have a material impact on their financial statements. In comparison, 75 percent of respondents indicated the standard would or could have a material impact on their financial statements. However, 43 percent of respondents have not started to implement the new revenue standard and of the respondents that have started, most indicated that they are in the very early phases of their implementation process. In addition, only 13 percent of respondents indicated that they have formally established a budget for implementing the new revenue standard.
The TRG has provided a public forum related to the new revenue standard and has addressed more than 50 implementation questions since its inception. (For more information about the TRG, see Deloitte’s TRG Snapshot newsletters.) In addition, the AICPA has 16 industry task forces that address implementation questions and plans to publish interpretive guidance that preparers can use to promote consistency.
SAB Topic 11.M (SAB 74)5 indicates that a registrant should disclose the effects of recently issued ASUs and SABs that are not yet effective “unless the impact on [the registrant’s] financial position and results of operations is not expected to be material” (footnote omitted). These disclosures are meant to help financial statement users assess the effect that new standards will have once adopted. Members of the SEC staff have reiterated registrants’ need to disclose the impact of the new revenue standard as it becomes known. In addition, as the effective date of the new standard approaches, registrants are expected to include more detailed SAB 74 disclosures in their filings.
For many companies, the implementation of the new standard is time-sensitive. If they have not already done so, entities should implement a change-management project plan that includes assessing the effects of the new standard and developing policies and systems to facilitate its implementation. In addition, entities should ensure that they identify appropriate leaders to oversee adoption efforts. In doing so, project leadership should enable effective coordination between all key functions of the company (e.g., solicitation and use of input from tax, human resources, contracting, sales, and investor relations, in addition to feedback from technical accounting, external reporting, and internal audit).
An appropriate change-management project should also ensure that an entity’s audit committee or others charged with the entity’s governance activities are included as active participants in the project plan.
1
FASB Accounting Standards Update No. 2014-09, Revenue From Contracts With Customers (codified in ASC 606).
2
IFRS 15, Revenue From Contracts With Customers.
3
Unless early adoption is elected, public and nonpublic entities reporting under U.S. GAAP are required to implement the provisions of the new revenue standard for annual reporting periods beginning after December 15, 2017, and December 15, 2018, respectively, and entities may use either a full retrospective or modified retrospective transition method. Along with the one-year deferral, entities reporting under U.S. GAAP are permitted to early adopt the new revenue standard; however, such early adoption is limited to the original effective date (i.e., generally annual periods beginning after December 15, 2016, and December 15, 2017, for public and nonpublic entities, respectively).
4
Responses to questionnaires were received from over 170 individuals in various industries, with a majority of the responses from those in the technology, media, and telecommunication industries.
5
SEC Staff Accounting Bulletin (SAB) Topic 11.M, “Disclosure of the Impact That Recently Issued Accounting Standards Will Have on the Financial Statements of the Registrant When Adopted In a Future Period” (SAB 74).