The accounting for income taxes under ASC 740 can be extremely complex. The amount of income tax expense an entity must record in each period does not simply equal the amount of income tax payable in each period. Rather, ASC 740 requires an entity to record income tax expense in each period as if there were no differences between (1) the timing of the recognition of events in income before tax for U.S. GAAP purposes and (2) the timing of the recognition of those events in taxable income.
In accordance with ASC 740-10-10-1, an entity’s overall objectives in accounting for income taxes are to (1) “recognize the amount of taxes payable or refundable for the current year” (i.e., current tax expense or benefit) and (2) “recognize deferred tax liabilities [DTLs] and assets [DTAs] for the future tax consequences of events that have been recognized in an entity’s financial statements or tax returns” (resulting in deferred tax expense or benefit). An entity’s total tax expense is generally the sum of these two components and can be expressed as the following formula: 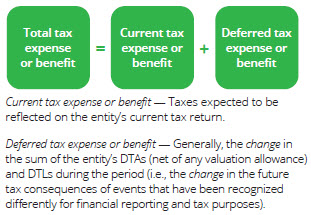 To apply the guidance in ASC 740, entities must understand not only the standard’s accounting requirements but also the tax codes under various jurisdictions. Accordingly, coordination between the accounting and tax departments may be required.
In 2017, we saw sweeping tax reform unfold in the United States as the Republicans, with small majorities in both the Senate and the House, pushed through broad changes as part of a budget reconciliation process. The Tax Cuts and Jobs Act (the “2017 Act”) introduced a host of new concepts, including a one-time transition tax on unrepatriated foreign earnings, along with incremental taxes such as global intangible low-tax income (GILTI) inclusions and the base erosion anti-abuse tax (BEAT). In some respects, however, the 2017 Act simplified the accounting under ASC 740 because assertions entities needed to make to avoid recording DTLs for unremitted foreign earnings now primarily apply only to ancillary taxes (i.e., withholding and state). In other respects, accounting under ASC 740 became more complex (e.g., DTA realizability assessments now have to take into account GILTI inclusions and other complications, such as more restrictive interest limitations under IRC Section 163(j)).
In 2020, some of those rules were relaxed as a result of the COVID-19 pandemic and the CARES Act, but the unstable economic environment brought its own set of challenges related to the ability to successfully forecast taxable income, both for establishing an entity’s annual effective tax rate used for calculating interim tax provisions and for assessing the realizability of net operating loss carryforwards and other attributes.
Now, fast forward to late 2021, and the stage has been set for “Tax Reform — Take Two,” this time with the Democrats holding even smaller majorities in both the Senate and the House than the Republicans did in 2017. Congress’s passage of a budget resolution in August 2021 paved the way for the use of a process known as budget reconciliation, under which qualifying tax and spending bills can be approved with a simple majority vote.
The House has subsequently introduced several iterations of a draft bill, the Build Back Better Act. Accordingly, as things stand today, the possibility of enacted tax changes sometime in the fourth quarter of 2021 is real but there would need to be nearly unanimous cooperation of the Democratic caucus; even one defection in the Senate or three in the House is likely to be sufficient to derail the package.
Under ASC 740, the tax effects of changes in tax laws must be accounted for in the period of enactment. Consequently, the passage of tax reform could greatly affect the annual reporting cycle that includes the enactment date. In 2017, the SEC allotted extra time under SAB 118 to address the changes that year; however, a similar extension may not be granted in 2021.
The FASB has undertaken several projects over the years related to reducing some of the complexity associated with the accounting for income taxes under ASC 740. Discussed below is the status of two such projects: one has resulted in a new ASU, and the other is ongoing.
The amendments under ASU 2019-12 are now effective for public business entities (PBEs).
ASU 2019-12 addresses topics such as the accounting for taxes under hybrid tax regimes, the accounting for increases in tax deductible goodwill, the allocation of tax amounts to separate company financial statements within a group that files a consolidated tax return, intraperiod tax allocation, interim-period accounting, and the accounting for the tax effects of ownership changes in investments.
For non-PBEs, the ASU is effective for fiscal years beginning after December 15, 2021, and interim periods within fiscal years beginning after December 15, 2022. Early adoption is permitted.
For additional details, see Deloitte’s December 19, 2019, Heads Up.
In March 2019, the FASB issued a proposed ASU that would modify or eliminate certain requirements related to income tax disclosures as well as establish new disclosure requirements. The proposed guidance is intended to increase the relevance of such information for financial statement users.
The proposed ASU outlines various changes to the disclosure requirements under ASC 740, including those related to disaggregation, indefinitely reinvested foreign earnings, UTBs, valuation allowances, rate reconciliations, operating loss and tax credit carryforwards, and interim disclosure requirements. The guidance would be applied prospectively as of an effective date to be determined after the FASB performs additional research and outreach.
For additional details, see Deloitte’s March 29, 2019, Heads Up.
For a comprehensive discussion of the income tax accounting guidance in ASC 740, see Deloitte’s Roadmap Income Taxes.