Home
Publications
Archive
Deloitte Publications
Heads Up
2017
Implementing the New Revenue Standard — How Do Your Disclosures Stack Up? (June 5, 2017)
Previous Section Next Section
...
2017

Implementing the New Revenue Standard — How Do Your Disclosures Stack Up? (June 5, 2017)

by Eric Knachel and Courtney Sachtleben, Deloitte & Touche LLP
As the effective date of the FASB’s new revenue standard approaches,1 there has been an increased focus on companies’ progress toward implementing its requirements. Some of our recent publications have discussed such focus. For example, our September 22, 2016, Financial Reporting Alert, outlines reminders from the SEC about best practices for registrants to follow in the periods leading up to the standard’s adoption, including remarks about SAB Topic 11.M2 disclosures (or “SAB 74 disclosures”). Further, in our April 4, 2017, Heads Up, we discuss the results of an informal Deloitte survey on implementing the new standard.
To gain additional insight into the implementation status of public companies, particularly regarding the types of disclosures they have provided about adopting the standard, we recently completed a review of the SAB 74 disclosures that the Fortune 1000 public companies have included in their periodic filings with the SEC. This Heads Up discusses certain observations from our review of those disclosures.
At the September 22, 2016, meeting of the FASB’s Emerging Issues Task Force, SEC Assistant Deputy Chief Accountant Jenifer Minke-Girard made an announcement (the “SEC staff announcement”) regarding SAB 74 disclosures. Ms. Minke-Girard indicated that if a registrant is unable to reasonably estimate the impact of adopting the new revenue standard, the registrant should consider providing additional qualitative disclosures about the significance of the impact on its financial statements. She further noted that the SEC staff would expect such disclosures to include a description of:
Overall, we have observed that the amount of qualitative and quantitative information disclosed in response to the SEC staff announcement has varied; however, most registrants have expanded their qualitative discussions of implementation efforts. For instance, while a majority of registrants have provided some information about the status of their adoption beyond merely stating that they “are currently evaluating the impact,” very few have quantified the impact of adoption. In addition, only a small number of registrants have indicated that they have early adopted the standard.
We also continue to monitor the expected method of transition. Under the standard, entities can use either the full retrospective method or the modified retrospective method. Figure 1 shows the selected transition methods indicated in the most recent periodic filings of the Fortune 1000 public companies.
Figure 1: Method of Transition 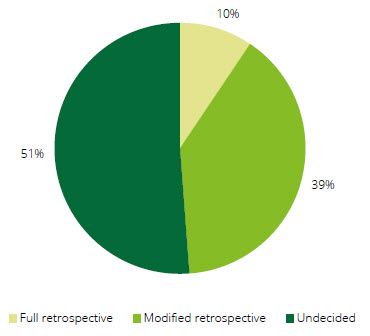 As Figure 1 illustrates, 51 percent of registrants are still evaluating which transition method to use, and only 10 percent have chosen the full retrospective transition method.
To further understand how companies are considering the SAB 74 requirements, we reviewed the disclosures in periodic filings associated with the calendar year-end and the first calendar quarter of a random sample of 100 companies from the Fortune 1000 group that did not early adopt the new revenue standard. (See further discussion below of specific considerations in light of the SEC staff announcement.)
Overall, most of our sample group’s disclosures remained unchanged from year-end to the first quarter, while approximately 15 percent of the group provided incremental disclosures or updates about their implementation efforts. Generally, the companies that updated their disclosures in the first quarter added any combination of the following: (1) a specific discussion of the new revenue standard’s expanded disclosure requirements, (2) a discussion of the company’s focus on accounting processes and internal controls, and (3) their selected transition method.
We considered certain qualitative disclosures, including those related to:
Figure 2: Qualitative Considerations 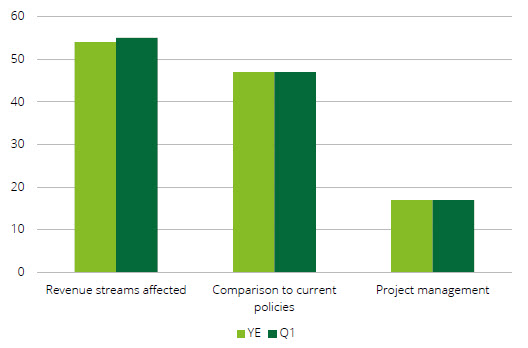 As illustrated in Figure 2, our sample population of disclosures remained relatively unchanged from year-end to the first quarter, and only a few companies provided incremental disclosures about affected revenue streams.
We also considered certain quantitative disclosures, including:
Figure 3: Quantitative Considerations 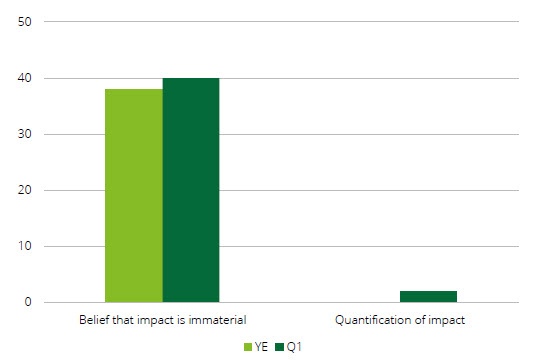 As Figure 3 indicates, over one-third of our sample population believes that the impact of adopting the standard will be immaterial, and significantly fewer companies disclosed the quantitative impact of adoption.
Figure 4 illustrates that almost all of our sample companies have disclosed that their implementation efforts are ongoing. However, only slightly more than half have provided specifics about unresolved matters related to their implementation analysis.
Figure 4: Significant Matters to Address 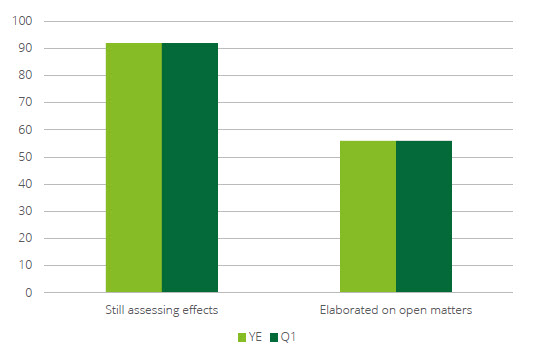 We observed that in addition to providing the disclosures specifically requested in the SEC staff announcement, a number of companies from our sample population described what their ongoing disclosure requirements will be under the new revenue standard as well as the standard’s effect on their accounting processes and internal controls.
Figure 5: Other Considerations 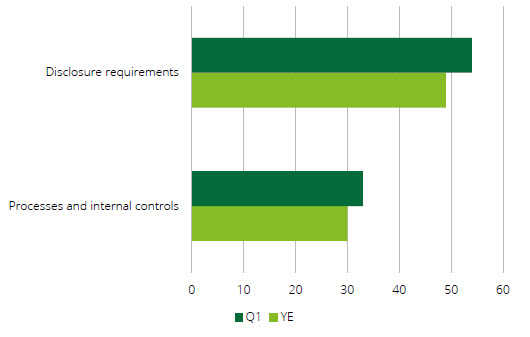 Under the new standard, companies must disclose much more information about revenue activities and related transactions than they do currently, including (but not limited to):
Our February 22, 2017, Heads Up discusses disclosures that may be particularly challenging for entities to provide.
In addition, the SEC staff continues to remind registrants of the significance of the new disclosure requirements. For instance, SEC Chief Accountant Wesley Bricker recently stated the following:3
I want to emphasize the importance of the disclosures in the new revenue recognition standard. There are a number of significant new disclosures, and for some companies, getting ready to prepare them might be one of the more challenging parts of the implementation process. We understand that for some companies, preparing the disclosures constitutes a separate work stream in their implementation plans. We have further observed that some of these disclosures may require coordination and interaction with various parts of the organization in order to compile the required information. My message today is simple — I would continue to urge companies to not wait until the end of the year before trying to get the data, systems, processes, and controls in place to make these disclosures. These disclosures are an important part of the new revenue standard for investors, and we urge companies to treat them as such and to allocate the appropriate time and resources to them.
The staff has also noted that “the basis of any statement that the impact of the new standard is immaterial should reflect consideration of the full scope of the new standard, which covers recognition, measurement, presentation, and disclosure.”4
Consequently, as illustrated in Figure 5, more than half of the companies in our sample population specifically discussed the new disclosure requirements in their latest SAB 74 disclosures.
Management will need to use significant judgment to comply with certain aspects of the new revenue standard’s requirements. Further, under the standard’s accounting and disclosure guidance, entities will have to (1) document new or different judgments and (2) gather and track information that they may not have previously monitored. As a result, entities may need to create, modify, and test controls, processes, and information systems associated with gathering and assessing the reliability of necessary information. Our May 9, 2017, Heads Up discusses additional internal control considerations related to the adoption of the new revenue standard.
The SEC staff has also focused on the importance of accounting processes and controls. For example, Mr. Bricker recently observed the following:5
Companies may also need to consider any changes they may make to their established business practices as they transition to the new standard. For example, companies may amend or tailor their contracts with customers. Application of the new standard, including preparation of the required disclosures, may also require gathering and analyzing new information and sharing such information with relevant parties. Management should consider whether its reporting systems are designed to accurately capture the effects of changes to customer contracts and other information required for compliance with the new standard and ensure the integrity of such information throughout the financial reporting process. Therefore, it will be important to take a fresh look at the information and communication component of ICFR and the related controls over a company’s information technology.
As Figure 5 demonstrates, nearly one-third of our sample population of companies discussed their efforts related to accounting processes and controls in their latest SAB 74 disclosures.
The SEC staff has indicated that in 2017 it will be expecting companies to expand their disclosures about the significance of the effect of adopting the new revenue standard. Accordingly, companies that have not yet started to assess the ramifications of implementing the standard or are in the early phases of doing so may need to accelerate their efforts. We will continue to monitor trends related to companies’ disclosures about the implementation and adoption process.
1
FASB Accounting Standards Update No. 2014-09, Revenue From Contracts With Customers, as amended. For calendar-year-end public business entities and other entities that elect early adoption, the standard’s effective date is less than a year away. See Deloitte’s A Roadmap to Applying the New Revenue Recognition Standard for a comprehensive discussion of the new standard.
2
SEC Staff Accounting Bulletin Topic 11.M, “Disclosure of the Impact That Recently Issued Accounting Standards Will Have on the Financial Statements of the Registrant When Adopted in a Future Period.”
3
Remarks (“Advancing Our Capital Markets With High-Quality Information”) at the 2017 Baruch College Financial Reporting Conference, May 4, 2017
4
Remarks at the Bloomberg BNA Conference on Revenue Recognition, May 8, 2017.
5
Remarks (“Advancing Effective Internal Control and Credible Financial Reporting”) at the Annual Life Sciences Accounting & Reporting Congress, March 21, 2017.
Copyright © 2023 Deloitte Development LLC. All rights reserved.